Hi all from little Singapore! It's been slightly too long since my last foray back into magic. Honestly, it had quite a bit to do with myself being lost around a myriad of decks. Ever since the rotation of Honor of the Pure and Hero of Bladehold, it's been hard to find a white weenie/human deck that has buttered my interest. I have spent quite some time with naya blitz, bant hexproof and Joe here...


It was pretty solid fun times until a certain beast trampled through the jungle and laid its turd across the format:

And games just went on and on....and aggro really didn't seem to cut it so well. I found myself playing around with the naya colours for burning tree emissary...but never really felt like I stood a proper chance with the nut draw.

So after a bit of dwindling...and waiting...and feeding on Craig Wescoe's latest concoctions...(and M14 came along!)...what really got be excited was the arrival of the white power ranger. 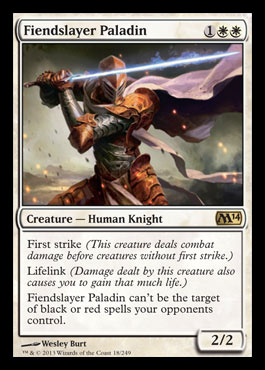 And to top it off...M14 threw in a blind obedience on a scepter!

Hence, I have been taking the time to brew some mono white human themed decks..but they never really had the reach nor the staying power. Splashing red for boros charm and some burn seemed like a good idea and I was having mixed success with a boros homebrew that ran the whole range of humans. Still it wasn't there yet.... until...this:

Now this is the real deal!! The master of white weenies returned with a vengence and I was itching to run this immediately. Craig posted a great deal of information regarding the playstyle of this deck against the current meta and you should check it out!

And sometimes the alignment of the stars makes a deal with real life and its responsibilities....I found myself with enough time to join a local tourney on Saturday at Gameshaven! So I sleeved up the deck...had a few warm up matches with my students..and into the battle i went!

Game 1: VS Esper Control (2-0)
Round 1 went relatively smoothly as I simply curved into Thalia and Sublime. A miracle terminus ( as always...) took my board on turn 6 and left him 1 life. On my turn,I cast Thalia from my hand and ate a Syncopate...he was tapped out. With 4 mana open, I took the game by casting a doomed traveller, followed by activating Slayer's stronghold. Craig was right about the land.
Round 2 basically ended with a curve into Burning Earth. From there, it felt really unfair and there really wasn't much he could do without an answer for it.

Game 2: VS Bant Aggro (0-2)
Now this was a rather bad game for me. Was it a bad match up? I couldn't be too sure. Basically I got beat down on both rounds and drew either into lands...or couldn't keep up with his race. Between VOR, Loxondon Smiter and Selesnya Charm...i had a major headache!

Game 3: VS Vampires (2-0)
Took both games on the back of knight of glory and fiendslayer paladin. Despite having the stomkirk noble on T1 in round 2, he just couldn't deal with a post-board hand of 2 banisher priests and 1 fiend hunter.

Game 4: VS Grixis Control (2-1)
Now this was an awesome match up.
Round 1 saw me beating him down to 4 health, only for him to recover with Far and Away. I drew into lands and he drew in drownyards and jace...basically ending the game for me.
Round 2 saw him drawing into lands instead...when i curved into Sublime and she survived long enough to steal a hit..it was clear he didn't have removals and I went for the kill.
Round 3 was the most hilarious game of ping pong ever. He struck me early with a duress and discarded my Burning Earth. At that moment, it didn't look promising as he had also pillared an early Thalia.

"It seems like another one of those days... the dark powers wresting control from the forces of goodness!" remarked my opponent.


I needed an out...took my turn, unkeep -draw....into:
With two burning earths on the field...I took a gamble and raced him with only a silverblade on board. He stared me down with a snapcaster, I parried an attack by casting Brave the Elements on mr shiny horse and my opponent duly concede...since all his lands were non basic.

And that ends my report for my return to competitive magic! Pro tip: Watch out for Burning Earth tech... it really really hurts.

Thanks for reading!
Posted by Unknown at 5:02 AM

Please feel free to share your opinions..I greatly appreciate them!